From Victoria, with love

Posted on October 5, 2009 by CleanEatingMama

We are back in the USA after a well spent weekend get-away in Victoria BC! The weather was perfect and we both loved it in Victoria! We took the Victoria Clipper from Seattle straight to Victoria BC. We were running very late, surprise surprise, Saturday morning and had to be at the ship at 7:45am. We ran and ended up being the last passengers to board. It was a packed boat, too. Luckily we were able to sit next to each other – I thought we were going to have to sit far from each other.

But let me back track a bit. Friday we officially started to celebrate our first anniversary! We got all dressed up and headed to a dinner and show, Teatro ZinZanni. This is an amazing show! You sit under a beautiful circus type tent, served a 6 course dinner and watch an acrobatic and acting show right in front of you! It is comedy, passion and raw talent all wrapped into a 3 hour show. The shows change every 3 months – we saw All Dressed Up With Somewhere To Go. They don’t allow photography in the tent as it can distract the performers but here are some images I found thanks to google images: (these photos do not represent the show we saw)

I did snap a picture of us on the way back home!

This was our second time to the show and it still amazed us! And the food and wine was dynamite! We ended up getting into bed at about 12:30 and we had to be back up at 5:30 to get ready to catch the boat! Ugh

OK, now onto the trip to Victoria. Like I stated before, we had to rush to the boat!
Whew! We made it and the boat was packed – a full ship up to Canada. We finally found a seat across from each other, sat down and relaxed. We made friends with the other passengers that were sitting around us – it was a table of six – one lived in Victoria and the others were travelers just like us. The local gave us some great tips and places to see. But then it hit me – motion sickness. Totally my fault as I know I have a problem with this but I forgot and didn’t even think to take anything before going. I have taken many ferry rides but since this is smaller than a ferry you can definitely feel the waves more.
2.5 hours later we arrived. I felt much better now that I was standing on solid ground and able to get some fresh air. (note to self – take dramamine BEFORE going on a boat!)

It was a beautiful day in Victoria! Our hotel was only a 2 minute walk from the clipper so it was very convenient. Since Victoria is right on the water, it was windy and chilly but the sun felt amazing.

We had a waterfront room which was very quaint. We quickly realized that Victoria has a lot of British influences – from buildings, attractions, decor and the local’s that live there. A lot of the people we talked to had accents, some recognizable and some not.
We went to our room, freshened up and we to walk around the city for a bit. We were starving as well and we heard Victoria had amazing sushi so we got a tip from the concierge at the hotel. 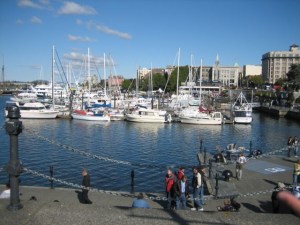 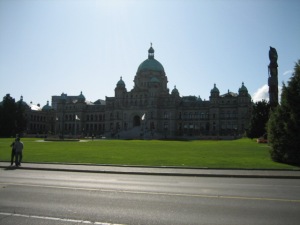 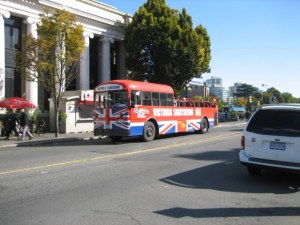 We ended up renting a scooter for a few hours just so we could see more in a shorter amount of time. We had a blast! At first we were going to each rent one but I wasn’t so sure of myself – new city, didn’t know where I was going and I really didn’t want to fall over or get hurt! Although I admit that I wasn’t the best passenger, either. 😉 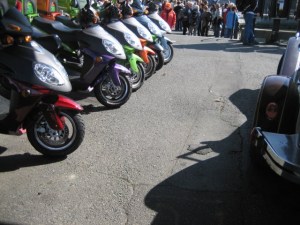 We were having so much fun riding around, laughing uncontrollably! I was waving, taking pictures and being the narrator of what we were seeing. Towards the end he made me put my camera away and hold on to him – boo, party pooper. 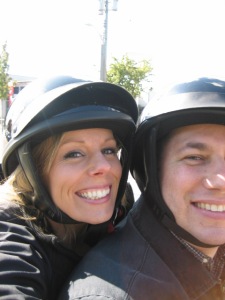 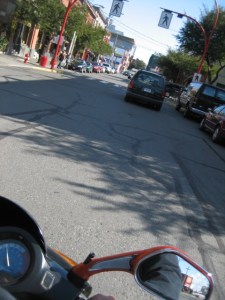 We finally found the sushi place in China town! Their China town was very small – only one block but I loved it! I wish we could have walked around more but both of us needed food!

The sushi was not disappointing! We ended up ordering a few rolls and a few pieces of sashimi – very fresh! We found our sushi place for the next time we go up there! 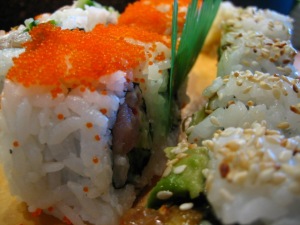 After we noshed on our lunch we headed back to drop the scooter off – we were exhausted! We took a leisurely stroll around the bay to help our food digest. Then headed back to our room and ended up taking a two hour nap! We really needed it! Unfortunately I didn’t feel that refreshed afterwords but taking a shower really hit the spot. We had dinner reservations at 7 in the hotels 4 star restaurant, The Mark. 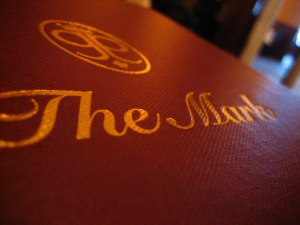 Very intimate, classy and the food was wonderful and very reasonably priced! I didn’t get a chance to take any pictures of the food since I had my little spare digital camera because I had my little black purse, but let me say it was one of the best steaks I have ever had! And the wine?! The wine selection was superb! We tasted a few, I picked a pinot and he picked a merlot and we ended up liking each others so we switched! We started with a very light and refreshing mixed greens salad, with heirloom yellow tomatoes, cucumber and a balsamic vinaigrette. Marc ordered duck and I ordered a tenderloin – both were plated with organic vegetables and mushrooms. Let me say that I am no mushroom fan, but my plate ended up having truffles. LOVE THEM. Expensive and rare but so worth it! We cleaned our plates :).
It was lovely to sit and relax by candle light. He ordered some hot water with lemon and I had black coffee with some biscottis, Madelin’s and cinnamon gelato. A perfect ending to a perfect meal.
Err, wait a minute – craving alert!
Marc had a chocolate craving so we talked to the concierge and he told us a place that had amazing chocolate cake – Rebar. Rebar was this funky, eclectic deli that has a passion for vegetarian and healthy food. AND has the best piece of chocolate cake around! It was a 6 layer cake for goodness sake and all hand made – a chocolate lovers dream! Even though we were there for dessert we looked at their menu and it was instant love! Fresh ingredients and a vegetarian’s dream! I can’t wait until we go back so I can sample some of their food items!

We had a short walk back to the hotel and the evening air felt so wonderful. The Parliament building was lit up and breathtaking.

As soon as we got back into the room, I washed my face, put my sweats on and went to sleep – soooo tired! Well, I take that back – I ended up writing a bit about some new blogging ideas that I am very excited to share with all of you! But that will be in a few days… 😉

Sunday – I woke up still extremely tired! I don’t know if it was because I had gotten practically no sleep the night before or if my body was playing catch up but I did not want to get out of bed!

After some coaxing we headed down to grab some breakfast and coffee. The hotel had amazing coffee – not bitter and it was surprisingly easy to drink. I love a good cup of black coffee.
They had an amazing buffet spread so we both decided on that. I got a plate of yogurt, fruit, walnuts, banana chips, half of a multi-grain bagel, a few slices of swiss cheese and some breakfast ham. Marc got a huge bagel with lox and cream cheese, eggs, bacon, sausage and french toast ( which I ended up eating ). It was a good variety and everything was fresh. We had to eat quite a bit because we had tea at 2:00 and they told us NOT to eat lunch. 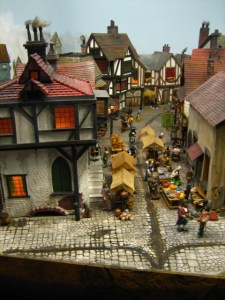 From the Civil War, to doll houses, to fairy tales and modern day, these exhibits were hand crafted by a few gentlemen that had a passion and love for all things small! The detailing was extraordinary and breathtaking! At first I thought it was going to be cheesy but it turned out to be a great sight seeing place! Amazing!

I told Marc that I wanted to see the Parliament so we headed there after we were done with Miniature world. Unfortunately it was closed on the weekends but it was still impressive and beautiful! 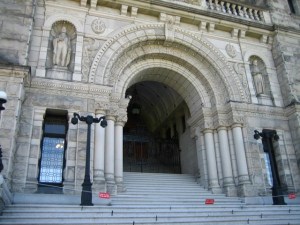 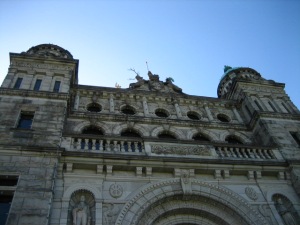 Next time we travel to Victoria we plan to go up on a Thursday so we can experience the city when certain areas are open.
We headed back to the hotel to check out and to put our feet up. We had afternoon tea at 2 so we had an hour to kill so we just chilled out in the lounge watching some football. It was nice break from vacationing.
They came in and grabbed us when our tea lunch was ready. They like to have at least an hour notice as everything is prepared fresh and ready to eat. I should have taken a picture and now I am kicking myself for not… but this is what it looked like but BETTER!

We enjoyed a lovely tea that was mellow, not too sweet and something that we both loved. Our lunch was served! And they were right when they told us not to eat lunch before hand – there was so much food!
Croissant stuffed with egg salad, duck confeit, avocado rolls, salmon pastry, scones, strawberries in chocolate boxes and so much more! We only were able to eat the first two tiers and had to save the scones for the ride home – We were STUFFED! Our waiter gave us a to-go bag of the tea we enjoyed so we could order more.
Divine! I am so glad we experienced afternoon tea!
After our bellies were full we had a few hours to kill so we just ended up watching some more football, walked to the pharmacy to pick me up some drugs (dramamine) and walked to the clipper. This time the boat was not nearly as packed and we were able to relax with some room next to us. We arrived in Seattle at about 9 and made it home by 9:30. We were exhausted but thoroughly enjoyed out first anniversary.
Good by Victoria, until next time!

This entry was posted in canada, vacation. Bookmark the permalink.

1 Response to From Victoria, with love